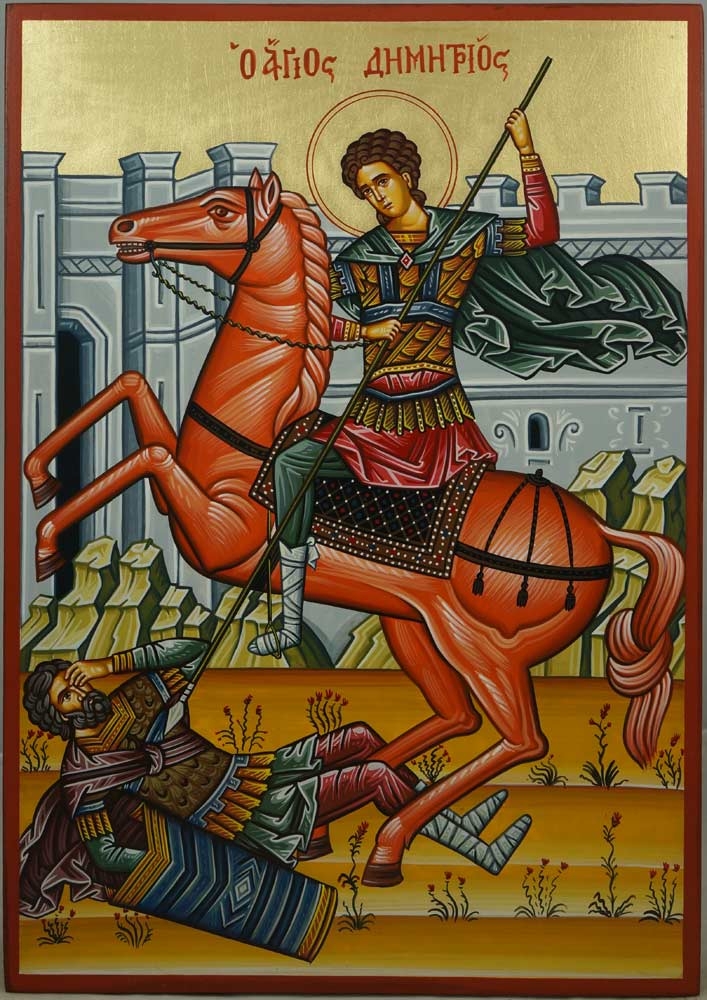 The saints of the church, who are alive in Christ, are not only models whose lives and devotion to God we should strive to emulate, but also are intercessors to God. Individual faithful and parish communities are called upon to take a patron saint, in the tradition of the Holy Orthodox Church. Early churches were built at the site of the graves of many of the Holy Martyrs. These communities were dedicated with the name of the martyr, and he or she was called upon by the community who worshiped there to act as an intercessor and protector for the faithful. Churches today place relics of the saints inside the Altar table as well as in places for veneration in the church in remembrance of these holy men and women in our lives.

Saint Demetrios suffered in Thessalonica during the reign of Galerius Maximian (c. 306). He belonged to one of the most distinguished families of the province of Macedonia and was widely admired not only because of his noble ancestry and grace of bearing, but also for virtue, wisdom and goodness of heart surpassing that of his elders.

The military expertise of Saint Demetrios led Galerius, as Caesar of the Eastern Empire, to appoint him commander of the Roman forces in Thessaly and Proconsul for Hellas. But for all this, Demetrios remained ever aware of the underlying realities of life. Since faith in Christ had touched his heart, all the glory of this world meant nothing to him, and there was nothing he preferred to teaching and preaching the word of God.

Despite the persecution directed against Christians by the Emperor, Saint Demetrios brought a large number of pagans to the faith. His words convinced them because they saw in the righteousness, peace and brotherly love that marked his life an illustration of the truth of which he spoke.

The Emperor Maximian had just won a series of brilliant victories over the Scythians and was on his way back to Rome when he halted at Thessalonica to receive the acclamations of the populace and to offer sacrifices in thanksgiving to the idols. A number of pagans, envious of the success of the Saint, took advantage of the Emperor's presence in the city to denounce Demetrios as a Christian. Maximian's astonishment gave way to violent indignation when he was told that Demetrios' was making use of his official position to spread the faith. Demetrios was summoned and confined in a cell, located in the basement of nearby baths.

Maximian arranged for games and gladiatorial combats to take place in the amphitheater of the city. He had brought with him a man of gigantic stature and Herculean strength called Lyaios, a Vandal by origin. Such was this man's strength and skill in single combat that no one could withstand him. There was in the city a young Christian called Nestor, who observing the empty pride of the Emperor in the victories of his champion, made up his mind to show him that real power belongs to Christ alone. He ran to the baths where Demetrios was imprisoned and asked for the protection of his prayer in going to confront the giant. The Martyr made the sign of the Cross on the brow and the heart of the boy, and sent him like David before Goliath. He reached the amphitheater just as the heralds were crying out on all sides for any who would stand against Lyaios. Advancing towards the Emperor, Nestor threw his tunic to the ground and shouted, "God of Demetrios, help me!" In the first encounter, at the very moment the giant rushed upon him, Nestor slipped aside and stabbed him to the heart with his dagger. There was uproar and amazement at the marvel, and people asked themselves how a mere child, relying neither on strength nor weapons, could so suddenly have brought down the barbarian.

Rather than yield to the sign of the sovereign power of God, the Emperor flew into a rage and ordered the immediate arrest of Nestor and his beheading outside the city. He had heard Nestor calling upon the God of Demetrios and, supposing the Saint had used some kind of witchcraft, Maximian ordered his soldiers to go and thrust Demetrios through with their lances, without trial, in the depths of his prison cell. There were some Christians, including Demetrios' servant Lupus, present at his martyrdom, and when the soldiers had gone, they reverently buried the Saint's body.

It was God's will that the grace with which He filled Saint Demetrios should remain active even after his death. This is why He caused to flow from his body a myron with a delightful scent, which had the property of healing all who took it as an unction, with faith in the intercession of the Saint. Time and again, during sixteen hundred years, Saint Demetrios has given proof of his benevolent care for the city of Thessalonica and its inhabitants. He has defended them from the attacks of barbarians, he has preserved them from plague and famine, healed the sick and comforted the afflicted.